“As an interviewer Grobel is: prepared, adaptable, and graced with the intelligence needed to shoot the breeze and elicit intriguing responses from uncommonly gifted and often uncommonly suspicious subjects.” 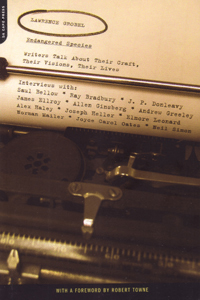 Norman Mailer once told Lawrence Grobel that writers may be an endangered species. And Saul Bellow told him, “The country has changed so, that what I do no longer signifies anything, as it did when I was young.”

But to judge from this collection, writers and writing aren’t done for quite yet. Sometimes serious, sometimes funny, sometimes caustic, always passionate, the twelve writers in Endangered Species (Mailer, Bellow, Ray Bradbury, J.P. Donleavy, James Ellroy, Allen GInsberg, Andrew Greeley, Alex Haley, Joseph Heller, Elmore Leonard, Joyce Carol Oates, and Neil Simon) memorably state their case for what they do and how they do it. And they even offer an opinion or two about other writers and about the entire publishing food chain: from agents to publishers to booksellers to critics to readers. Not surprisingly, it makes for some great reading.