By Lawrence Grobel on January 20, 2006 in Articles, Interviews

Do you think American life is safer now than in the past?

MAILER: No, of course not. Because it can’t be done. It’s a vain, false enterprise. A pious enterprise. We’re doing it as a cover, which politicians talk about all the time, in their efforts to legislate it. Concomitant with the growth of technology there’s a sort of spiritual software that accompanies technology, and that is control over our lives. You push a button delicately here and a button delicately there to adjust the situation. Those people detest violence because they keep breaking up the patterns, and the control. More than half the people in this country opt completely for control of their lives. What they don’t control is their death, and that drives ‘em right up the wall. One big reason why I’m so obsessed with Egypt and decided to write Ancient Evenings is precisely that I wanted to write about a culture that gave great preface to death; that lived for it, prepared for it, dwelt within it, in which virtually all of one’s acts in one’s life were steered toward one’s death. It seemed to me that this is much more profound than what we have now. That’s why people have such extraordinary reactions to Ancient Evenings, they love it or they detest it. Because people, without exception, who hate it are people who love a lot of control and high tech in their lives and don’t like to talk or think about death.

Do you still reflect much on the horror of modern life?

MAILER: We’re in danger of a nuclear war until we get to a point where the sustenance of existence is almost entirely leeched out. About the time that we live with too many people on earth, all living in high-rise buildings, all utterly colorless, dull, and oppressive, and every building put up is as ugly as the one before, and when we drive we breathe nothing but polluted fumes on superhighways and there’s smog everywhere, and all the palm trees are wilted as they are in Mexico City, and the rivers are filthy, and everything is flat an dull, and sex is merely an extension of herpes, etc., etc., and people are dying of AIDS all over the place—at that point, the nuclear bomb is going to seem welcome to people. Because at least it’ll be their last shot at transcendence. We’ll all go up together in that great white light. And at that point, we’re in danger.

Mailer has written 36 books, a third of them novels. And though many critics believe that some of his best writing is his journalism, he always played that down in favor of his fiction.

“The only important piece of nonfiction that I wrote was The Armies of the Night. Miami and the Siege of Chicago is a good piece of reportage. Of a Fire on the Moon [his book about space and the astronauts] is a very good book. Marilyn is a good biography, but tainted to a degree. Where’s all the great nonfiction? The novels are much better.”

Before he published his novels about the CIA (Harlot’s Ghost) and the young Adolph Hitler (The Castle in the Forest) I asked him which of his books he thought he’d be remembered for. He answered, “The Naked and the Dead, The Deer Park, An American Dream, The Armies of the Night, Marilyn, Why Are We In Vietnam?, The Executioner’s Song, and Ancient Evenings. Those will probably be the ones.”

His last novel, The Castle in the Forest, was his attempt to explore the evil that was Hitler. Like his books on space, Egypt and the CIA, this too had been planned as a trilogy. But like the others, he’s too old and too fragile to reach his ambitious goal. His working title for the novel was Hitler’s Mother, which probably would have attracted a wider audience. When I saw him again, in July 2007, he told me, “Hitler’s Mother would have sold more copies, no question, but on the other hand I didn’t like it, I thought it was ‘right on the nose,’ I don’t like titles that are too head-on. I thought The Castle in the Forest was such a pretty title for a book that’s not that pretty. I want to go on with the Hitler book but whether I will or not remains to be seen.  I’ve made too many promises over the years for books I didn’t write. It’s probably my last novel. It’s a matter of having the energy to keep writing and I may not have the stamina.” 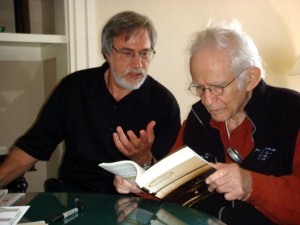 His stamina has taken considerable blows that would have destroyed most men. He had heart surgery a few years ago, and recently both his lungs collapsed and he was in intensive care under critical conditions. He has arthritic hips, forcing him to walk with canes. He has asthma which makes it difficult to breathe.  He’s lost a great deal of weight because he has no appetite for food. But he hasn’t lost his fire. He still speaks out. He still writes about the horror of modern life. They awarded the Nobel Prize to Doris Lessing in 2007. They should have given it to Mailer.  It’s the one prize that’s so far evaded him, so that he might finally be able to have an answer to Saul Bellow’s cutting remark. Only if they ever give Norman Mailer the Nobel Prize, he wouldn’t trade it